The Curse of Brahma: Super Thrilling first installment of The Krishna Trilogy 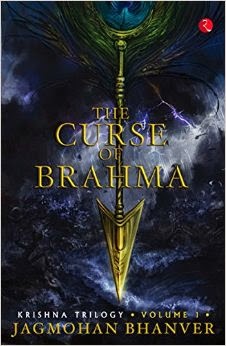 Good & Evil are two sides of a mirror; The pristine, clear, reflective side that shows us our appearance is Good, but the dark underbelly behind it…what is that?? Evil?? Or a counter reflection of You?? No one person is all Evil & no one person is all Good. There are elements of both in each one of us!! It is just a matter of time, which side of the mirror overtakes us first, & becomes the part of our being, thereby shaping actions & destiny of the course of future forever!!

Every thing that has happened or is happening has a story…every such event has a reason!!!

When I was given Jagmohan Bhanver’s “The Curse of Brahma” to read – the first instalment of his offering, THE KRISHNA TRILOGY, I honestly thought, “Oh no!!! One more trilogy?? When will people stop LOTRising our Vedic History into an over stylised fantasy fiction??!!” Yes, I have read almost all the “bestselling” fantasy fics on Indian Purans & Epics, & have not been impressed with any of them so far. I felt they were either too simplistic; if not that, then too amateurish; if not even that, then too Americanised in their language; if not that, then either unnecessarily sensational or too ho-hum. I had not stumbled upon one wholesome work that gave me a perfect blend of facts & fiction, all wrapped up in an interesting package; where neither is the Vedic fact compromised, nor is characterisation compromised, nor is fictional story around it irritating & cringe-worthy, like something getting in your way.

The Curse of Brahma addresses each of these points with great dexterity. As the name suggests, it is part of the Krishna Trilogy, therefore it focuses on Krishna Leela, i.e, Dwapar Yug. The author, Jagmohan Bhanver, takes his own pace & time to unfold his story. In fact, I did wonder, what has Brahma got to do with Krishna’s story at all, isn’t that Vishnu’s domain? ; & This is where Bhanver digresses you beautifully from the facts given in the Puran to his own fictional story of how the big Dwapar Yug drama unfolded.

In fact, the whole book is a perfect symmetry of fact & fiction.

What sets Bhanver’s book apart from others in the same genre is, that while most of the books use ready made facts & characters as main plot line to start their work & weave the fictional story or character in between the narrative as a secondary plot, Bhanver’s book takes the opposite route. His primary characters or start of the story is purely via fiction, and then slowly incorporates real characters & story back into his fictional narrative to make complete sense of the whole story & where it is headed. This, to my mind, was very brave of the author, as not only it involves exercising your own creativity & not solely relying on ready made story obtained from Purans; it also gives a different outlook & meaning as to why the major events of Dwapar Yug actually happened, the end of which earmarked the start of KaliYug.

I will not reveal too much about The Curse of Brahma as it will end up divulging the spoilers of the book’s plot. But I will tell you what to expect when reading this book:

·     Original story to kickstart the book: As the name suggests & the Book’s summary suggests, it starts with the after effects of a curse given by Brahma that shapes the destiny of future & propels the Sampoorna Avatar (Complete incarnation) of Vishnu to come on Earth. I had not read about any such event in Purans & was pleasantly surprised that Bhanver’s imagination did not underwhelm the unfolding of actual events of Krishna Leela.

·      Amartya Kalyanesu – Watch out for this character!!! So much depth & dimension to explore in him!!

·      Conceptual explanation: As is the norm with books of this genre, The Curse…also explains some important concepts of cosmology & the Holy Trinity to make absolute sense. They are not over the top nor are they underwhelming in their explanantion.

·      Character build up: Bhanver has given enough time & thought to build up his characters & given reason as to why someone became how they are seen today in the pages of History. It’s not a cardboard caricature like many books of this genre easily slip into (take Amish’s Shiva Trilogy as an example: Sati is a ferocious & strong willed warrior princess who fears no one & does not think twice before wielding a sword, yet she gives into regressive practices like Vikarma with absolute ease, believing she deserves to be ostracised for “crimes” she has not even committed!! Or on one hand Daksha is willing to break any law & do anything to protect his poor daughter from the fate of being a widow; yet he plots to suddenly kill Shiva, irrespective that his daughter will again be thrown into the same fate that he fought against in the first instance; take Ashwin Sanghi’s The Krishna Key as an example – Tarak Vakil, the main protagonist is this smooth serial killer who thinks he is the incarnation of Krishna & is annihilating Evil through his murders…& then suddenly this strong character turns into…into…something like Tarak Mehta ka Ulta Chashma!!). Bhanver’s characters on the other hand stand firmly on their feet & act & react exactly how they should, given their characterization. If someone changes his or her colours, a valid explanation of that is also given to make it look wholesome & logical.

·      Romance Plots: I can say one thing very safely; most Indian authors (not all…mind you), just cannot write romance with ease. Cannot!! And authors of this genre, just cannot. It just does not come out naturally & looks like an effort. It’s exactly how our film stars used to kiss on screen – cringing, like on a gunpoint, like a chore that has to be done. Amish’s Shiva Trilogy (especially the first book) made a difficult read for me solely because of this reason; Shiva & Sati romance (where even the serial Mahadev could do a good job) was so cringe worthy & “trying too hard”. Ashwin Sanghi’s Krishna Key romance was similar & a total washout; Anand Neelakanthan’s Ajaya track of Karna - Draupdai & Duryodhana- Subhadra was laughable!!! Compared to that romance plots were few in Bhanver’s book but well developed, subtle & came in as a matter of fact. The Devki & Vasudev romance was nowhere cringing in nature & nor were side plot romance tracks. The important part was, that while these tracks were there, they were not causing an impediment to the main plot, but were simply contributing to it.

·      Thrilling build up: The book is a thriller for sure!! The plot of the book thickens into thrilling events one after the other. Whether it is the fight sequences or events mentioned in the Purans, they have been given a wonderfully ominous feel. You can almost feel such events unfolding right in front of your eyes. The fight sequences are especially worth mentioning; they themselves have a character of their own.
Another thing that caught my interest was how Bhanver delved into gore when required (not unnecessarily or too much) to create significant amount of pathos. His description of Tamastamah Prabha – the Hell of Hells was eerie & pathos inducing. However, he did not delve so much into it either, as to take away from the main plot of the book. His focus & commitment to the story was always there.

To sum it up Bhanver’s The Curse of Brahma is Thrilling, Intelligent, Pacy, Brave & laced with a strong narrative. It works on its own fictional plot first & then smartly weaves in the events mentioned in Purans….and boy does it deliver!!! I just hope the rest two books in Bhanver’s Krishna Trilogy live upto the pitch at which this book takes you as a reader!!

(Disclaimer: This is not a paid article; the views expressed in this review are blogger’s own opinion)
Posted by Kitabi Keeda at 17:17