The Truth About The Harry Quebert Affair – by Joel Dicker 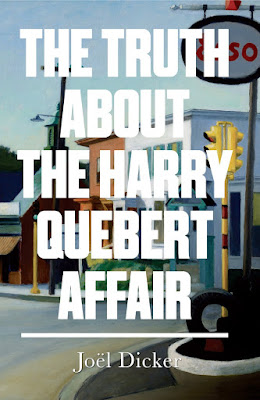 The Day of Disappearance (Saturday, August 30, 1975)
"Somerset Police. What's your emergency?"
"Hello, My name is Deborah Cooper. I live on Side Creek Lane. I think i'v just seen a man running after a girl in the woods."
"Could you tell me exactly what happened, ma'am?"
"I don't know! I was standing by the window. I looked over toward the woods, & i saw this girl running through the trees. There was a man behind her. i think she was trying to get away from him."
"Where are they now?"
"I can't see them anymore. They're in the forest."
"Im sending a patrol over right now, ma'am."
The news story that would shock the town of Somerset, New Hampshire, began with this phone call.

This was the very first page of the whodunit that left me in a tizzy. A story starting with this premise could only promise something good….rather very good.

I first came upon Joel Dicker’s bestselling thriller, reading a book recommendation article in Mint’s weekend edition of Lounge. The premise of the book was so brilliant that I immediately booked my copy.

In a classic whodunit style, The Truth…focuses on a very prominent & celebrated author of the past & his protégé, who goes on to become a prodigy of sorts as well, falling in the footsteps of his mentor, Harry Quebert.

After writing a super successful bestseller, the protégé, Marcus Goldman, is struck with writer’s block & is simply unable to pen another expected “bestseller”.  Distraught & facing the possibility of a major lawsuit from his publishing house, he retreats to the quiet town of Somerset, where his mentor Harry Quebert is living his days out. Goldman needs some quiet, some inspiration that can chug the writer in him back in action.

It is here that Goldman stumbles upon an affair that happened 30 years back, between Harry & a young girl Nola Kellergan. Harry is still heartbroken about the sudden disappearance of his girlfriend & cannot seem to move on in life from that sore spot.

Goldman returns to his home, still without a story, & still facing a lawsuit. One fine day, he receives a phone call, & is asked to switch on the news. Nola’s remains have been found in Harry’s own lawn, buried deep inside, and the legendary author is now facing charges of sexual assault, possibly rape & murder of a 17 year old Nola Kellergan.

Goldman, who cannot believe his mentor could do this, embarks upon an investigation of the case….and the case that opens up is so terribly complex & layered that it becomes difficult to find the truth…page after page!!!

I am revealing no further spoiler here, as that will simply deceive the purpose of writing about a whodunit. The information I have let out above is what you will also read at the back of the book & on promotional details of the novel; and trust me when I say it, that’s just the start of this roller coaster ride.

Joel Dicker, a young Swedish author, with his debut work has hit the nail right on spot. The book is especially a bestseller in Europe, and is touted as Sweden’s answer to Swiss thriller “The Girl with the Dragon Tattoo”. I would not call it an answer to the latter, as that 3 part thriller was truly more riveting, tightly knit, better characterized. Having said that, I cannot take away from the brilliant effort that The Truth…is.

The Truth…might intimidate you with its sheer length & breadth (it’s a huge book), however it’s a sure shot page-turner, from the word go.

The book is deeply layered, like any mystery/thriller/whodunit, with a bouquet on interesting characters forming their own small weave of mysterious backstories, thereby resulting in the arrow of suspicion being pointing at each. However, what especially caught my attention about this book was not only the main plot revolving around Harry Quebert, but the beauty with which the side stories also get their own character & form a completely detached mystery. It was like reading 2-3 mysteries in one book, yet not losing focus from the main plot. Balancing this act was truly a feat by Dicker.

The Truth…often alternates between a time gap of 30 years back & forth in order to relate the whole story thus taking it’s time in unfolding every nuance of the story.

The most striking feature for me in The Truth…was Harry’s mentoring of Marcus in just some impactful lines…chapter after chapter!! It was quite a treat for aspiring writers like me!! J J I have picked up a few tips for sure. J

The Truth…will soon be adapted into a major motion picture!! Grab the copy & read the thriller before that!!